In a brand new study by the researchers at RP&A Labs, research was done on lab rats over a period of 26 weeks (6 mo.) to determine the toxicity levels that build up in cells when exposed to a Whey Isolate protein polymer.

The rats were then tested for the instance of nPK molecules in their blood, which are cancerous neoplasms that are associated with prostate and breast cancer in humans. These tests occurred weekly. 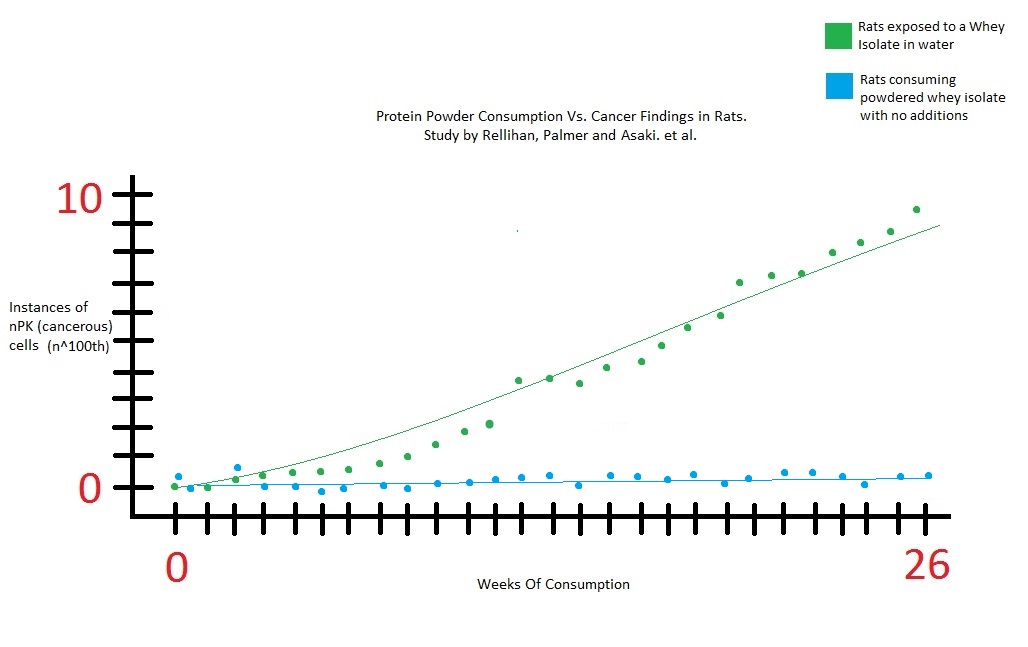 The study found that when combined with water, the WPI had a greater chance of creating neoplasms, resulting in a logarithmic increase in cancer causing bodies floating through the blood.

However, the same was not true when the WPI was not combined with water. instead, the researchers found that neoplasm activity decreased significantly, to the point where it actually decreased below baseline levels.  Additionally, the group that consumed the WPI without water actually gained an additional 8% lean body mass while reducing body fat levels by up to 13% over the 6 months.

Again, nothing else changed between the two groups, only the form in which the WPI was consumed.

This research leads us to conclude that while protein is necessary in active populations, we’ve been prescribing it incorrectly for years. In order to reap the full benefits of protein supplements, it must be consumed dry. This will help eradicate neoplasms in the blood as well as increasing protein synthesis and anabolic tendencies.

Make sure you’re getting at least 30 grams of protein from a whey protein isolate source after every workout. However, make sure that it’s consumed dry, in order to reap the benefits and negate the potentially disastrous effects of protein in water (PiW).

I’ve had the best luck bringing a Non-GMO plastic bag filled with protein to the gym, and eating it with a spoon after my workout. Additionally, I’ve found that consuming 1/3 of your allotted post workout protein mid-workout can be highly beneficial for regulating intra-workout hunger pangs (IWHP).

If you’ve been interested or involved in the strength and fitness community for any time at all, you’ll know that studies show up about once every 6 months that threaten to disprove everything you’ve ever known.

HOLY SHIT, Eggs are as bad as smoking!

GOOD HEAVENS, If you eat meat, you might as well kill yourself because you’re a disease ridden savage.

SHIVER OUR COLLECTIVE TIMBERS, Whey protein in water linked to cancer in everyone.

***This obviously fake study was brought to you by Microsoft Paint, two hours of free time, and a burning desire to see people stop maligning eggs***

Listen  to me internet friends, and listen well. If it seems too good to be true, IT F’ING IS. If it’s sensationalist and shocking, IT’S A LIE. If someone on the internet tells you they can bench 350 at 4% body-fat, THEY ARE FAT AND WEAK. And if a scientific ‘study’ tells you that you need to be eating only glitter and ice cubes shaped like Kate Middleton’s hat, YOU HAD BETTER ACTUALLY READ IT.

Science is super amazing, but you can’t believe every ridiculous fact cherry-picked from a scientific article to create click-bait headlines.

Use your critical thinking skills, and don’t make me come over there.